Last week I showed you the content of a Bonhams sale from January 1992. In it a large number of ex-BBC Costume Dept outfits from Doctor Who were sold off.

Since then I have found another catalogue from 1992, this time from August.

Interestingly a number of the extensive Doctor Who items sound very much like those sold back in January, though with much higher estimates this time around.

More recently I think we have seen some of these lots continuing to be sold on. It’s fascinating to trace the items back through the various auction catalogues, following the prices they sell for.

Lot 645 The Dr. Who Annual, 1966, 93 pages, with colour illustrations and colour hard cover, published by World Distributors by arrangement with the BBC.
Estimate £40-60

Lot 648 Dr. Who—The Auction, Catalogue from 11th May 1991, sale of selected costumes from the Wardrobe, 42 page catalogue with black and white illustrations, colour cover, together with a sheet of prices. (2)
Estimate £10-20 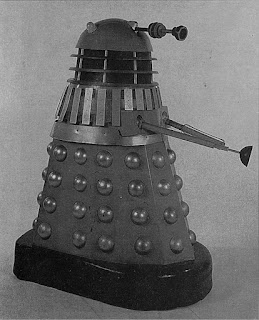 Lot 651 A red and silver Dalek, believed to have featured in the ﬁlm ‘Dalek: Invasion Earth 2150 AD’ with Peter Cushing as Dr. Who.
Won in a breakfast cereal competition in the 1960’s.
See illustration.

Lot 652 A Dalek, scratchbuilt to a high standard and realistically modelled and ﬁnished in grey and black.
Estimate £400-600

Lot 655 Two linen bodices, With large padded sleeves and brown trousers to match, possibly to be worn under some form of body armour from a l960’s/
1970’s episode.
Estimate £50-80 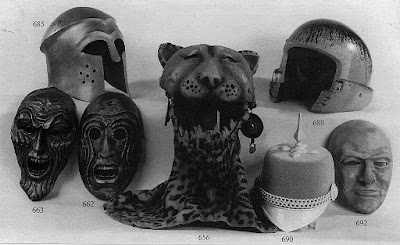 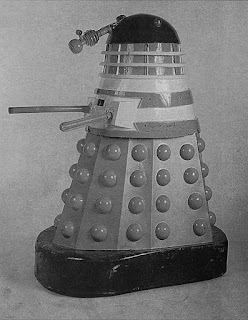 Lot 659 Early BBC television Dalek from the late 1960’s.
Estimate £1,000-2,000
Footnote: This Dalek is sold in aid of Bedford Round Table and has for several years been used to generate street collections and general fundraising.
Some modiﬁcations have been made during a long charitable life to atone for previous evil deeds and it is now painted red, white and blue. It could however be restored to its 1960’s condition to provide a rare opportunity to own an early example of one of the most famous and popular screen
monsters.
See illustration.
Posted by Steven Ricks Tailoring at 14:00