Back in October last year I went to one of the barking signing sessions run by Tenth Planet Events.

It was a nice reunion for actors who had appeared in the two Dalek feature films of the 1960s, with Barrie Ingham and Jennie Linden from Dr. Who And The Daleks; and Jill Curzon and Ray Brooks from Daleks’ Invasion Earth 2150 A.D..

I had a bit of a nightmare with the train getting there, so I arrived after the official signing period was over - and after Bonnie Langford had already left. I’ll have to get her another time.

After the interview session ended a couple of the guests had to leave, but the organisers arranged for me and a few later runners to get them before they left. 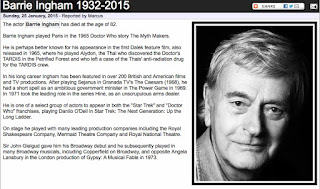 This included Barrie Ingham, who a few months later sadly died, so this was his last public appearance, and my book was one of the last things he signed. When I say his obituary on the Doctor Who New pages, it did choke me up a little.

BARRIE INGHAM played Alydon in Dr. Who and the Daleks and Paris in The Myth Makers. 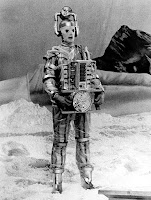 ALEXANDRA TYNAN is a costume designer best known for her design of the Cybermen in The Tenth Planet.
Tynan trained at Belfast College of Art and worked as a costume designer for the Royal Shakespeare Company and the National Theatre before accepting a staff role at the BBC in 1964.

BONNIE LANGFORD appeared as the Doctor's companion Mel, debuting in Terror of the Vervoids, one of the stories in The Trial of a Time Lord, and departing at the conclusion of Dragonfire. She has since reprised the role in several audio dramas for Big Finish Productions. She first achieved fame as a child actor, starring in the television series Just William and the film Bugsy Malone. 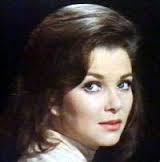 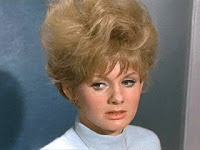 JENNIE LINDEN Her earliest film appearances were as the heroine in Hammer Film's Nightmare and Barbara in Dr. Who and the Daleks. Her most widely known film role was as Ursula in Women in Love, for which she received a BAFTA nomination. 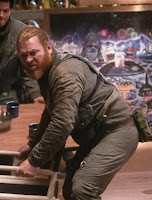 JULIAN SEAGER Played Big Redf in Nightmare In Silver. He has recently been cast in TV shows such as Poldark, Doc Martin, Cuckoo. 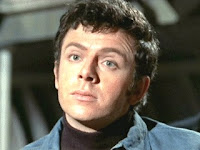 RAY BROOKS played David in Daleks’ Invasion Earth 2150 A.D..
He is known for being the narrator on Mr Benn and King Rollo, and for the comedy series Big Deal.
Posted by Steven Ricks Tailoring at 21:16