Now I’ve got a new place for all my First Doctor costumes, I thought I’d pull together all the recent auctions that have included costume pieces from Hartnell’s era.
Here is the first, from June 2009. 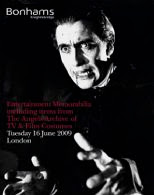 Amongst the James Bond and Beatles items (and Christopher Lee’s original cape from his first Dracula film) are a number of original Doctor Who costumes, some dating right back to the very first season in 1964.

Also on sale are three Doctor costumes; one from Jon Pertwee’s last series; Jon Pertwee’s jacket when he appeared in the Children In Need special, Dimensions In Time; and a near complete Colin Baker outfit (sadly missing the coat).

Visiting the sale gave me the chance to see first-hand some fabulous original Hartnell era costumes and appreciated the detail that went into making them.

I have separated the items by Doctor era, and you can see the rest of the items here: 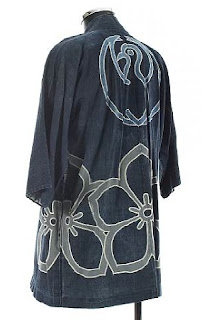 Lot 1
William Russell as Ian Chesterton from Dr Who: Marco Polo and The Keys Of Marinus series, featuring William Hartnell as The Doctor, first broadcast February - April 1964 and April - May 1964.
An oriental style kimono, of linen, in denim blue type colour with characters applied to collar and having large characters to back.
Footnote:
This garment is clearly visible in episodes of the Keys Of Marinus.
Estimate: £1,000 - 1,500
Sold for £2,520 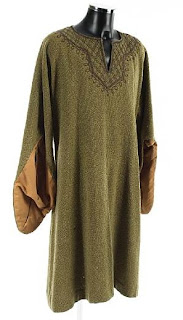 Lot 2
Mark Eden as Marco Polo from Dr. Who: Marco Polo series, featuring William Hartnell as The Doctor broadcast February - April, 1964.
A tunic, of green, brown and mustard coloured woven twill type fabric, with braid detailed collar, embroidered to neck with bronze coloured metallic thread, in linear motif, having hook and eye fastenings to front, with large cuffs and slit to front.
Footnote:
Shown as part of the first Dr. Who series and originally broadcast as seven episodes during February to April 1964, the Marco Polo series, featured a purely historic type Doctor story. Unfortunately, no footage of the series remains, having been lost in the 1970's, however this garment can be seen on period publicity stills of the show.
Estimate: £800 - 1,200
Sold for £1,920 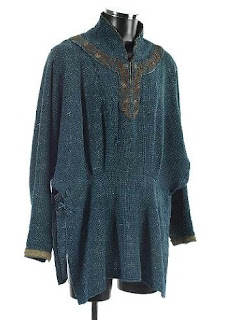 Lot 3
Julian Glover as Richard The Lionheart from Dr. Who: The Crusade, featuring William Hartnell as The Doctor, broadcast March - April, 1965.
A tunic, of blue, black and turquoise woven twill type fabric, with braid detailed collar, embroidered to neck with bronze coloured metallic thread, in scroll motif, cuffs edged with braid, having hook and eye fastenings, labelled inside “Bermans & Nathans, 40 Camden St., London, N.W.1”.
Footnote:
Originally broadcast as four episodes, during March to April 1965, the Doctor finds himself involved in the Third Crusade. Unfortunately, much of the original film for the series was lost during the 1970's, however, this tunic can be seen throughout the publicity material for the Crusader series.
Estimate: £1,000 - 1,500
Sold for £2,040 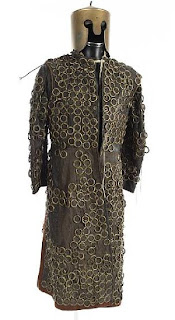 Lot 4
Trap Garden Statue from Dr Who: The Keys Of Marinus, Episode 3 - The Screaming Jungle, featuring William Hartnell as The Doctor, first broadcast 25 April 1964.
The complete costume for the mechanical trap garden statue, which attacks Ian during the episode, outfit comprising: a metal helmet, with cut-out nose guard, sprayed with gold coloured paint, with loop to top; a canvas bodied jacket, with leather sleeves, with applied brass hoops throughout, labelled inside “L&H Nathan, 143 Drury Lane, London, W.C.2”; a sleeveless leather tunic, full length, with matching applied brass hoops and laced back.
Footnote:
This costume can clearly be seen during the episode and the trailer.
Estimate: £500 - 600
Sold for £1,320

Posted by Steven Ricks Tailoring at 16:27