Today I thought I’d update you on a Tenth Planet signing session I went to back in late February this year.

The organisers of Tenth Planet Events often get a good line up of half-a-dozen guests from both classic and new series, but back in February they really excelled themselves.

It turned out to be a William Hartnell era fest, with ALL six attending having worked in those early years of Doctor Who. 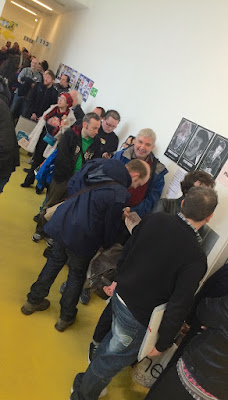 The event is also very reasonably priced. Each autograph (regardless of notoriety) is £10. But if you buy four, you get a fifth for free - which at £8 a hit makes them the cheapest I’ve seen anywhere.

For the first time (I think) they have arranged for photoshoots like they do at their larger conventions. Two were held: one with all the guests attending; and a second with just the companions Maureen O'Brien, William Russell and Peter Purves. The group shots were a reasonably priced £30.

This proved to be a MAJOR draw, and the queues were out of the door, with several times the usual numbers attending.

The companions were particularly popular, so they were set up in a room of their own while the others guests were in an adjacent room. 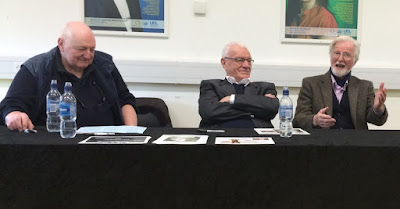 Usually there is a question and answer panel once everyone has got their autographs, but this time around it was only possible for the secondary guests to share their recollections with a very appreciative audience.

RICHARD MARTIN directed several of the earliest Doctor Who stories. His work included three episodes of the very first Dalek story, and all episodes of the next two Dalek adventures. 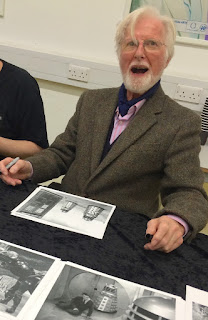 Despite his age (85) he was very enthusiastic and engaging.

He was more than happy to sign my book, which he remarked upon the leather cover.

JEREMY YOUNG appeared as Kal in An Unearthly Child and Gordon Lowery in Mission to the Unknown. From 1961 to 1976, he was married to Kate O'Mara. 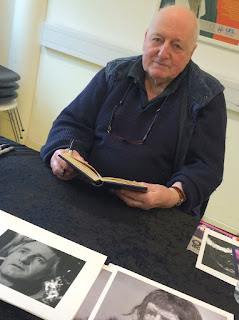 I remember Jeremy from a number of other ITC series of the sixties, as well as The Avengers. It was real nice to meet him in person after seeing him in so many iconic series.

PHILIP VOSS appeared as Acomat in Marco Polo and Wahed in The Dominators. 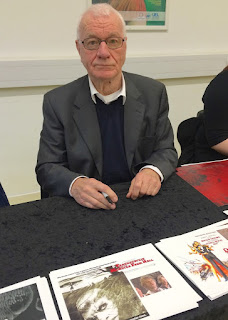 He was also a familiar face in a number of the later Hammer Horror films, including Frankenstein And The Monster From Hell.

These days Philip is well known for being in Vicious, alongside Sirs Ian McKellen and Derek Jacobi.

MAUREEN O'BRIEN played Vicki in Doctor Who, beginning with The Rescue and ending with The Myth Makers. She has also appeared in many other televisionprogrammes, most notably Casualty. 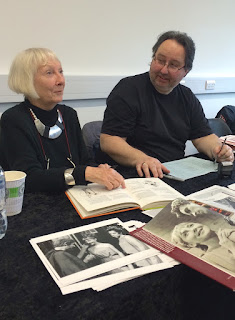 She is always wonderful to meet, but the queue for her was quite long and she is already in my book, so I just wanted as she chatted to fans.

WILLIAM RUSSELL played Ian Chesterton from An Unearthly Child to The Chase. 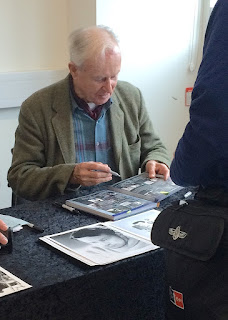 Again, his queue was almost out of the door, so since he is already in my book I just watched as he chatted to fans.

PETER PURVES played Steven Taylor from The Chase to The Savages. He also had a small comic role in The Chase as American tourist Morton Dill. 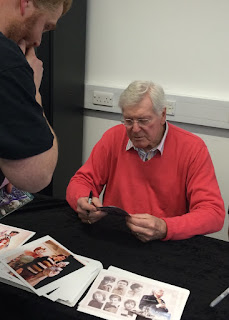 The final guest was also in my book already, but it is always nice to eavesdrop on what he has to say, as he speaks with great affection about his time working on the series.
Posted by Steven Ricks Tailoring at 13:38